So many people ask, so I thought I would just tell it here, while I was in the blogging mood. When my second child was 16 months old, we found out we were expecting again. While we were quite happy about it-we had been trying for a few months-I was a bit nervous as I tend to get very sick during the first part of my pregnancies. Sure enough, at just about 3 weeks, the nasty sickness started. Oh well…at some point, I remember telling my husband that if we wanted to have our four kids we would have to adopt, because I couldn’t imagine being that sick with THREE little ones running around! I went to the same midwife i had had with both of my other kids and things were going fine until I started getting chastised for the amount of weight gain…I gained 14 lbs in a two week period with no change in appetite or activity. I couldn’t figure it out! Finally, at 18 weeks, it was time for the ultrasound. I went alone, since we didn’t expect it to be anything unusual, and thought I had plenty of time to finish up and go pick up my youngest from preschool. I was lying on the table, the technician smiling and asking random questions to make me comfortable. Then I noticed that the questions had stopped and her face was looking a bit confused. She stopped and said, I’ll be right back. My stomach dropped. What could be wrong with my baby!!!!??? Pretty soon, she comes back in with the main tech guy, who introduces himself and says that he will be doing the rest of my ultrasound. sheesh! I was scared. I wanted my husband to be there so badly! Then he smiles as he moves the thing over my belly. “Yes, it looks like twins.”, he says….Shock…joy…shock…when can I call my husband?? Before I called him, I had to call the preschool to let them know I would be late. Apparently, it takes twice as long to check out twins! 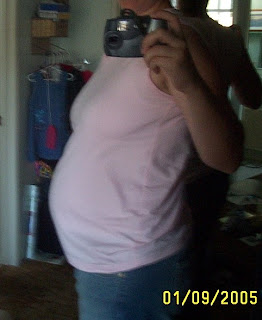 This picture is me at 19 and 1/2 weeks, about a week after I found out it was twins.

Eventually, the sickness subsided and we continued to try to prepare for the two babies that would be coming. My midwife couldn’t legally deliver them, due to strict laws in CA. (stupid!) So I had to start seeing some regular OBs. In my town, covered by my insurance, there wasn’t much to choose from. All the OBs in the practice I landed at were only willing to offer me the natural option if both babies were in the head down position but they would prefer to just schedule my C-section for sometime after 36 weeks, assuming I made it that far. I prayed a lot. I didn’t feel like that was what I needed to do so I found another option. We hired a midwife from 100 miles away to come and do a home birth, if things were all good. We live 5 minutes from the hospital so we figured that it would be easy to use that as a back up plan. Honestly, I wouldn’t recommend this unless you really have a peace about it from God! 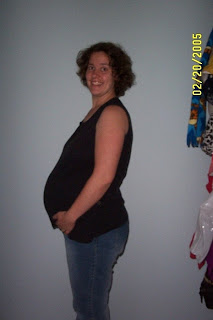 This is me at 24 and 1/2 weeks. I already looked 9 months and I was only about half way there! Yikes! 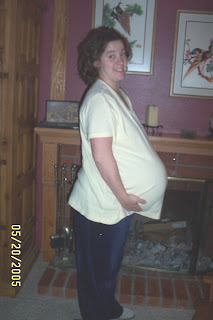 This is right before the twins were born. Actually, I think I may have had a couple more weeks after this. It was insane! By 36 weeks, I was using a walker to get myself out of my bed. The only place I could sleep was on our antigravity chair with my feet propped on pillows on a dining room chair. My poor kids knew that mommy wasn’t going to get up to break up their fighting or pick them up if they fell. So sad! When we went to the store, I had to park in the handicap spot just so I could make it in! Then I would use one of the in store wheelchairs so I wouldn’t have to stop every 3 feet to rest. I was heavy! Though, I only gained a total of 63 pounds. Not too bad for two full term babies. My mom, bless her heart, took a sabbatical from work to come stay with me and help with the kids for 3 months. She was there for the last 6 weeks of the pregnancy and for a month after they were born. She was amazing.

Delivery Day:
At 40 weeks plus 1 day, I woke up at 4:30 in the morning to go to the bathroom, not an uncommon event. It happened to be a weekend that my dad and sister were visiting, and it was a Sunday. On my way to the bathroom, all of 10 feet, my water broke. It felt like I peed all over myself, but without the actual action of the bladder involvement. I was shocked. I hadn’t had that happen before. I told my husband, “Uh, I think my water broke. I didn’t know that happened in real life! I thought it was just a movies thing! Well…I guess we should call the midwife, huh?” At that point I still hadn’t had any contractions but I figured they would be starting soon enough. So we called her. She got right up and was on the road within 1/2 hour. Good thing too since it was an hour and half drive to get here. We started setting up the bed with the plastic and the old sheet and woke Mom up at around 5 or 5:30am to let her know that we would need Dad on kid duty that morning.
The contractions finally started around 5:15 or 5:30a, going from 5 minutes to 4 minutes apart pretty quickly. By the time the midwife arrived at 7am they were about 3-4 min apart but not too bad. Once she had gotten set up, she checked me and told me that whenever I was ready I could start pushing. What?! I wasn’t ready. The one thing I remembered very clearly from my first two births was that the time right before the pushing was the hardest because the urge to push was overwhelming. This time, I wasn’t overwhelmed yet. So I waited. Then waited a little longer. At around 8:10a, she suggested I go ahead and start pushing. So I did. My daughter Eden was born at 8:23am. She came out so fast that the midwife almost dropped her. The contractions mercifully stopped for a few minutes, and Eden’s twin slipped into place as she worked her way out. My husband cut her cord while she lay on my stomach. I think I might have said, “I don’t want to do that again!”
Pretty soon, though, the contractions started again and I had to start pushing again. I was so tired! To make matters worse, he was in the breach position! I felt like I pushed out his head but heard the midwife say that only his bottom was out and that we had just a few seconds before he would start losing oxygen. She sounded a little scared so I grabbed everything that I had in me and pushed til I couldn’t anymore. Finally, he was out. Asher was born just 35 minutes after his sister, at 8:53am. Of course, with him, came such a gush of blood that everyone knew something was wrong. As we would find out a bit later, their cords were very short, only about 12 inches each, and they were both attached to a fused placenta that was in a good high position. When Eden came out, she tore a bit of the placenta away from the uterine wall, leaving a gush of fresh blood flowing. Since Asher immediately moved into place in the birth canal, he effectively plugged the hole so that no one knew I was losing blood. By the time he came out I was so weak from blood lose that I passed out twice while they were trying to change the sheets on the bed. I was plied with this green drink and gaterade, and the midwife tested my blood about once an hour. There was point when I knew that if I went to sleep I wouldn’t wake up so I told whoever was there to make sure to wake me up if I stopped breathing. My sister told me later that there was a moment when she saw me “leave”. I was there, then I wasn’t. It really freaked her out. I knew that I didn’t want to die, that I didn’t want to leave my husband with four little kids to raise on his own, that I wanted to raise them myself. I thought all of that while I was just minutes postpartum. I guess it was enough, cuz here I still am. 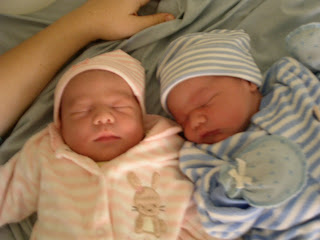 Day one, we finally got them weighed, after all the drama subsided. Eden weighed in at 8 lbs 1 oz. Asher was a whopping 8 lbs 8 oz. The placenta was another three pounds. When I was able to get up to get on the scale the next day, I found I had lost 25 lbs in a day. What a lovely feeling!
It took me three weeks before I was allowed up and around. I basically lived in my room with my babies. Food was brought, visitors came, my girls came in a few times a day to hang out with me, but it was a long three weeks. It was 5 weeks before I could walk without great pain, and 5 months before I could walk on a treadmill. I think I may have fractured my pelvis while they were in there, and it took me that long to recover. Now, they are 3. Beautiful, amazing, full of personality and life. I wouldn’t have changed anything. 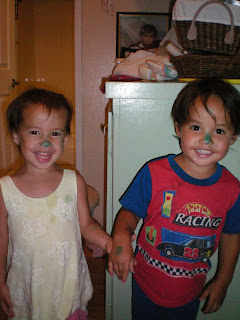