We get all of our produce from a co-op of organic farms called Abundant Harvest. We love them, wish they were just slightly more local, but haven’t been able to find what we need from local farms. Our area is JUST getting on the organic band wagon and we still deal with a lot of spraying and GMO crops.

Anyway, they have just started their summer fruits and have an optional add-on of 15lbs of cosmetically challenged stone fruit for $9. I don’t know about you, but a deal that good is hard to pass up. The first week, my kids ate so much I barely had enough to make a couple peach crisps!

Additionally, my friends and I started a small garden co-op this year and see that we might run into a slight abundance of things like tomatoes and cucumbers. I had never canned anything before but have always wanted to. My friend Erin however, is a seasoned jammer.

Soooooo, yesterday, with some of her materials, I took all those peaches and made some jam. 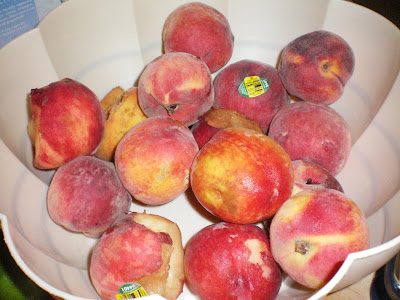 Now, we are all into that Nourishing Traditions, slow food, traditional cooking thing, so I couldn’t just use any jam recipe or any pectin. I wanted to make my jams with honey, so I could feel good about my kids slathering it on their biscuits. Apparently, jams are delicate, though a pretty simple process. I don’t know that much about jamming but I do know that you pretty much need pectin and that you have to get special pectin to make no sugared jams. It is nearly impossible to find organic pectin (if anyone has a resource please let me know!), so we get our natural stuff from Pomona. 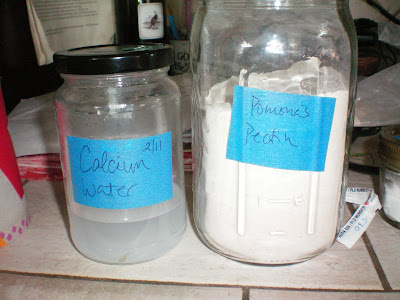 These are Erin’s supplies!

So here is what you need:
Fresh fruit in season
pectin
calcium water
Some smallish canning jars and lids
sweetener, honey, rapadura, coconut sugar, etc.
lemon or lime juice
a few pans for heating
a very large stock pot or roasting pan for boiling the jars 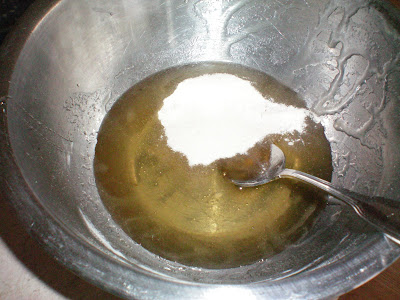 I followed the recipe on this page. So I started by peeling and mashing a bunch of peaches. I set those aside to deal with in a minute. Then I measured out just less than a cup of honey. Put it in a bowl with 1 tbsp. of pectin. Those have to be mixed together until the pectin is completely incorporated. 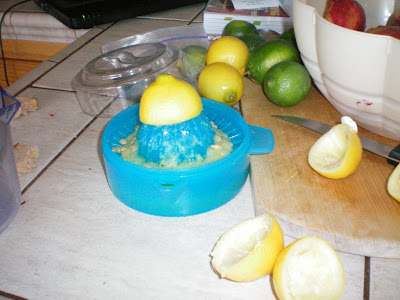 Next, I took all those organic lemons and made some lemon juice. I needed 1/4 cup to add to the 4 cups of peaches. Then I added 4 tsp. of calcium water (see instructions on the recipe sheet) and mixed that all together. In the meantime, I was also preparing the jars. 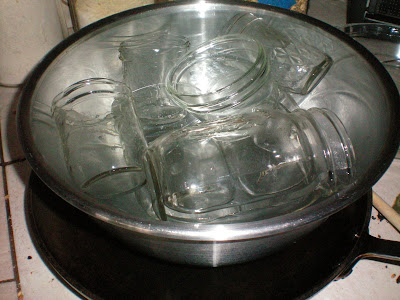 First, I washed all of the jars in warm soapy water, then let them sit in hot water until I needed them. 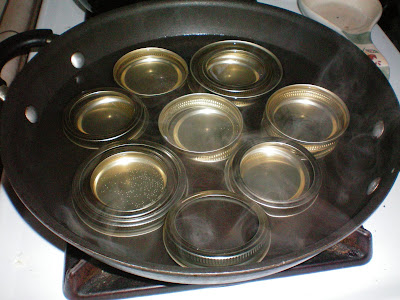 Then took all the lids and rings and boiled them. After boiling, I just turned down the heat and let them sit in hot water til I needed them.

Once that stuff was ready, I took the peaches and boiled them in a medium sauce pan. As soon as it boiled I added the honey mix and stirred vigorously for 1-2 minutes until it was well mixed. Then I let it come to a boil and turned off the heat. 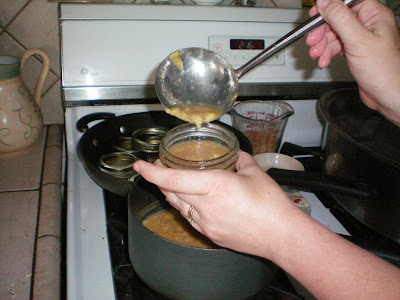 Filling the jars is a no-brainer, except there has to be about 1/4 inch left from the top of the rim. Wiping the rims with a clean towel is essential for sterilization purposes, then the lids and rings go on. 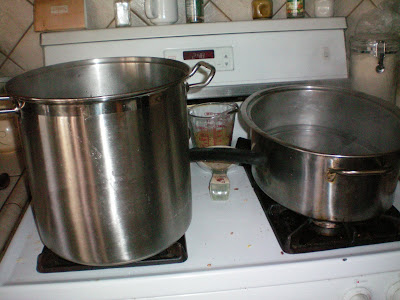 I started with just my roasting pan but by the second batch I realized that I had a couple jars that would not be completely covered when I put them in, so I had to bring out the big soup pot. I used tongs, though it would be really nice to have those specialty tools for placing and removing jars from boiling water. 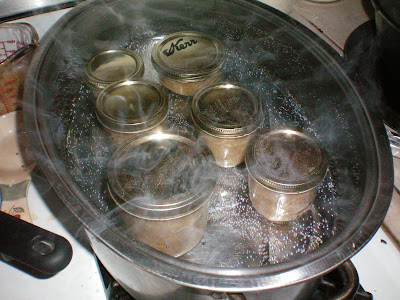 The jars have to boil for about 10 minutes before they are removed and allowed to cool without being touched. Apparently it can take up to 2 weeks for them to set!

I am trying really hard not to touch all those beautiful jars right now, but I am very excited for my next venture in food preservation. I would love to get to a point where all of our canned foods come straight from our own garden or local farms.

This post is part of fight Back Fridays hosted by Food Renegade!