Pizza will never be the same

For a few years now, I have been making homemade pizza, partially to save money and partially to prove that I could be THAT good. But lately…I think I may have achieved star status. Ramiah, my pickiest eater, not only loves to help MAKE the pizza, but has proclaimed that pizza is her FAVORITE. (I suppose it is of no consequence that she wants to p 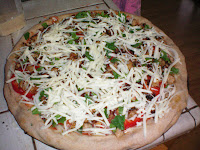 ut all the stuff on it but even as she is grinning about eating “piiiiiizzzzzaaaaaa” she is picking all of that stuff off!)
Until last week, Asher, my allergy boy, has always had to have a separate pizza that was only his. It was always made with less sauce, (tomatoes give him a rash), and some other kind of cheese, (soy-before I knew better, almond-just gross, goat-only kinda gross). His dairy allergy always made his pizza just different enough that nobody wanted to share…
Until this week. 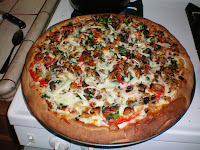 I now buy only raw cheeses, obviously made from raw milk. So this week, we made pizza with a raw cheddar. It smelled divine, looked even better and the taste…ah well…let’s just say that dear hubby proclaimed this one to be one of the best yet. And the best part? Asher ate from the same pizza as all of us! Not only that, he ate 4 slices before I cut him off! Oh, dawn has risen and the family is whole! (Okay, slightly melodramatic, but it was a good day, a very good day.)

Asher isn’t pictured, but his twin sure enjoyed it too! By the way, this is also a great way to get the kids to eat their veggies. This pizza had peppers, tomatoes, onions, and spinach on it. Apart from Miah, nobody took anything off the top! If you want my recipe, leave me a comment. 🙂 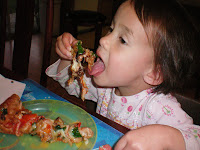